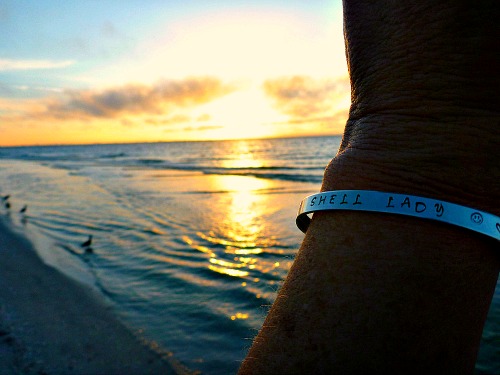 Many years ago I resolved never to bother with New Year's resolutions, and I've stuck with it ever since.  ~Dave Beard

We finished this year with a very pleasant day on the beach....I would never complain of it being too cool at 63 degrees in January!! It was a very nice way to end the year! We didn't have great luck shelling, but are grateful to be able to be here and grab a little bit of year end beach therapy in the process. We were greeted early by a dolphin, I didn't get the camera soon enough to catch a shot with him right up at the shore.....he was just having an early breakfast! 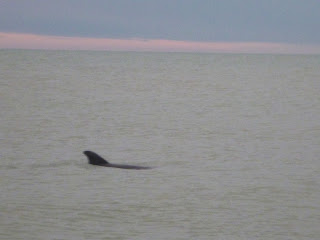 This guy was having a leisurely breakfast also! 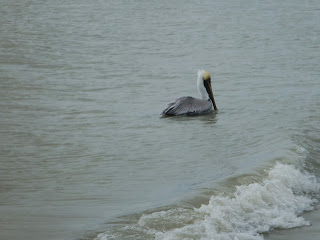 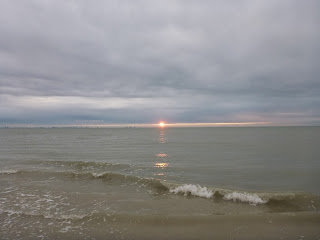 I found this Alternate Tellin first thing, I had never found one before! It looks like the coquinas on steroids....and it was perfect.
I also saw this in the sand.....do you recognize what it is? 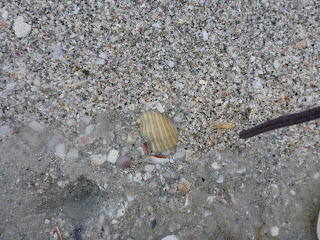 One of my favorites....a Horse Conch, also called a Florida Conch.....it's not perfect like the one I found in early December, but I'll take it! 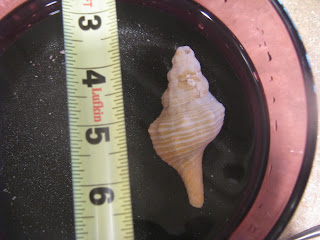 I also found these small pretties....My mind is already working about what to do with these little guys!
I hope all of you and your families have a safe and happy New Year's eve, and that 2014 wakes you up tomorrow with new hope for a special 2014!

Keep your Christmas-heart open all the year round.  ~Jessica Archmint

I just realized that I had not posted a Merry Christmas to all of my blogger buddies and I am ashamed!! The last few Christmases in our family have changed dramatically and with those changes come adjustments and lately they have used most of my time!! I do apologize!! Let me wish you a Happy New Year early and please know that I hope that you had a wonderful Christmas and that 2014 will find you and your families well and happy!!

As I mentioned earlier, our Christmases lately are different, very little family traditions are the same and we are constantly scurrying around trying to adjust and possibly begin new traditions.  Our families gave us wonderful gifts for our new place in Florida, so we decided to take them down and see if they "fit" at our new house!! :) 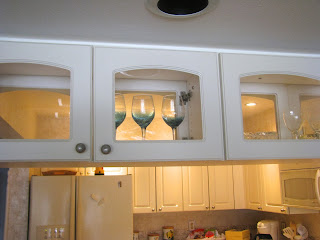 Every day is an opportunity to make a new happy ending.  ~Author Unknown

I realized I didn't share yesterday's shells with you all, so I will post both days here and will probably have another post tomorrow because we are going to experience the luminaries on Sanibel tonight!!

So here are yesterday's treasures remember it was fighting conch day!! :) 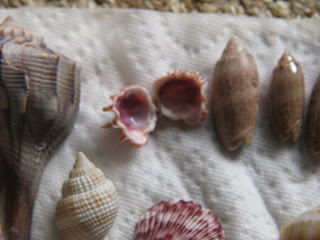 We finished off the day with the best seat in the house....Dinner with a view!! 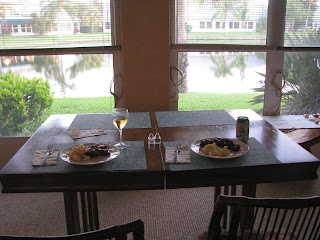 Today we went back to the tidal pool, Hubby worked in the same area as yesterday for a little while, I worked along the edge of the pool and did a little digging in the pen shells, looking for minis.

I just did catch the sunrise...a little late!! 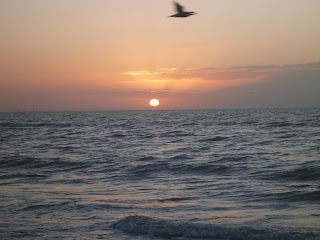 We had some surprise finds today too!!
He's taking a bath in some bleach right now so I will post pics when he's all cleaned up!! What a great way to finish the shelling trip!!

Someone had already decorated the beach...how Awesome is this?? A Beach tree... Love it!! 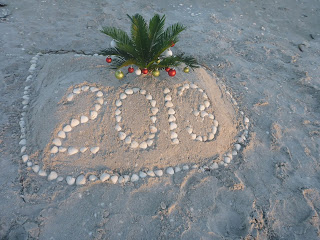 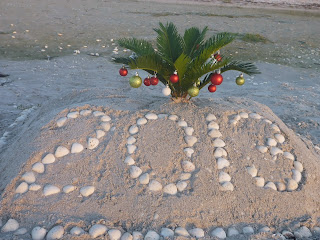 We will be heading home tomorrow :( But will have another post showing you all the sights and sounds from luminaries on the island!!

A day of Firsts!

"For whatever we lose (like a you or a me),
It's always our self we find in the sea."

First, let me show you our finds from yesterday! We found most of these in the tidal pool with light digging around pen shells. Notice we both picked up an angel wing!!

Today was another beautiful day, we got up before the sun so we could greet it walking along the gulf.  We headed down toward Sundial (East) so we could be at the tidal pool today as it got uncovered by the ultra low tide.  We immediately found pen shells and started carefully moving them, (while checking inside them) and found a few little pretties, banded tulips, apple murex etc.

We moved down a little and found a place that had pen shells that were buried, and obviously had been for a while. It's only in about 6 or 8 inches of water.  I immediately spotted one of my favorites, horse conchs, 3 of them, alas they were alive. 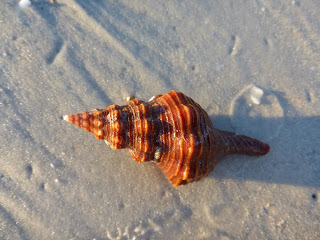 We started checking each pen shell and they were absolutely LOADED with juvenile fighting conchs, and everywhere we dug we would find them!! There must have been thousands of every size and color you could imagine!! They were all dead, though some still had the meat in them and had to be carefully flushed out!! They must have gotten trapped and died there!! We dug there for a couple of hours, I did the Sanibel Stoop for a while, then the Sanibel Squat and finally just plopped down and did the Sanibel Sit!! Hubby had enough and headed back down toward the car to work on another area and I stayed put for a while....we never scratched the surface! For the first time ever I got tired of finding shells!!!
They were all mini fighting conchs, with a murex every so often....I could not imagine that I would get tired of them, I kept thinking I would find something else....but I didn't and never finished looking in an area any bigger than about 3 foot square! It was amazing!! I will go back tomorrow to the same place, and try in that center area!!

On the way back I started noticing the patterns in the sand that the live olive trails made, how cool would these be if you 'jazzed' the pictures up using different colors or even tried to spell out words and put them on the wall in matching frames?! They were just awesome!! 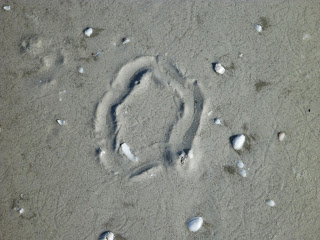 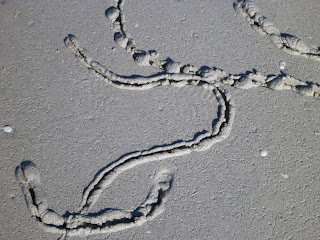 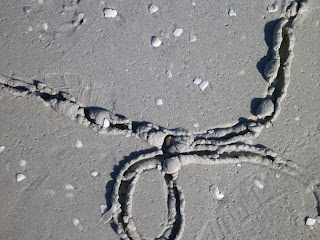 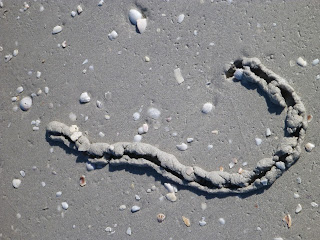 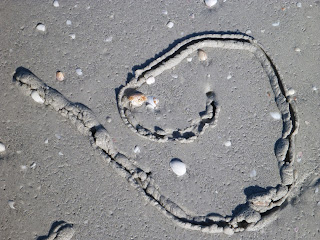 Just about the time we got to where we would head in toward the car, I noticed some movement on the sand! Look what it is!! Another first for me...a Seahorse!! He was obviously distressed and needed to be put back into the water so after snapping a few quick pictures I walked out fairly deep to put him back in!! I just can't tell you how fantastic that is to me!! I think of seahorses like unicorns, that they are just fantasies....this one was real and alive....so, so Awesome!! I am still so excited! My Seahorse picture and decorations at our condo in Ft. Myers now take on a whole new meaning!! ....Just Awesome!! :) 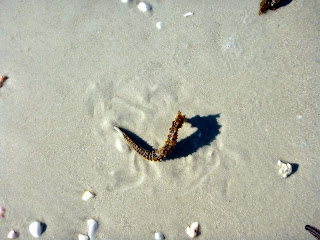 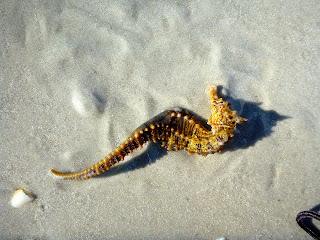 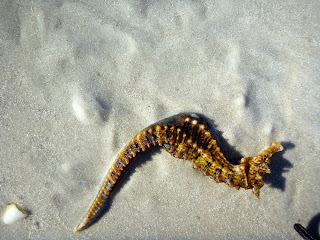 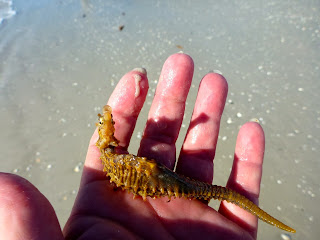 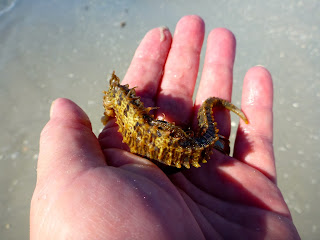 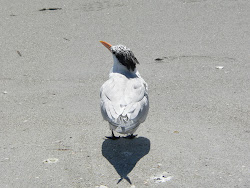 Talk about Pear shaped....check out the shadow!!

Shelllady
Virginia
I'm an avid sheller, Mom, Gammaw, Hokie Football fan and cook...Not necessarily in that order!! I love the outdoors and everything in it and I like to take photos and this blog will be a place to share them!! We are living our dream, well at least part time, we have purchased a home in Ft. Myers now that we get to visit fairly frequently, and hope to own on Sanibel one day! After graduating from Virginia Tech Vet School as a Doctor of Veterinary Medicine (DVM) our Daughter and her Husband live in Blacksburg with our Grandson, Joseph and as of March 2018 another Grandson Gideon! We have 4 more Grandbabies in New York who have just gotten into the shelling there, we cannot wait to get them to Florida and do some shelling (here)! They all have been finding some real treasures, and the oldest is even Shellcrafting! This blog is a way to share the many adventures that life continues to throw my way!! Thanks for stopping by!